The Most Valuable CryptoCurrency to Invest Other Than BitCoin 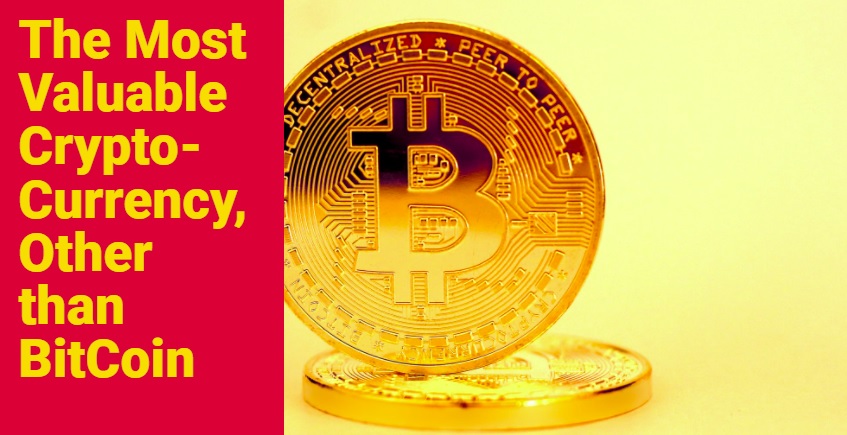 No one is required introduction of Bitcoin, the most profitable and volatile CryptoCurrency in the world.  People who are having and owning bitcoins, have become Millionaire and Billionaire.

Single Bitcoin as on 8th May 2021 is equivalent to $58,715.10, this is huge.  Just to give you some more knowledge on BitCoins, there are just 21 million Bitcoins in the world.  There have been hundreds of websites, through which you can earn few portions of bitcoins.  I have already written a blog on “How to Earn Free Bitcoins every day“.

Those who have invested in bitcoins have been in profit, those who have not, they can still invest in it.  As per market investors and research analyst, 1 Bitcoin by year 2030 will be $500,000.  This is not 100% confirmed, these are assumptions and speculations.

But, in this blog we will not get into details of BitCoin, we will check other CryptoCurrency which are growing day by day and can be a good competitors of Bitcoins.

The CryptoCurrencies which we will discuss in this blog are showing the same growth trend like Bitcoin.  Some of these currencies are not even worth $1, but eventually in coming years these will grow and will worth hundreds of dollars.

So, this is the best time to invest in these new cryptocurrencies.  There are also many advantages why one should go with cryptocurrency other than Bitcoin.

Let us check out some other alternative crypto-currency other than Bitcoin which are valuable and worth buying.

Dogecoin is a cryptocurrency created by IBM software engineers Billy Markus and Jackson Palmer.  Dogecoin features the face of the Shiba Inu dog from the “Doge” meme as its logo and namesake.

Dogecoin was officially launched on December 6, 2013, and within the first 30 days there were over a million visitors to Dogecoin.com

Dogecoin has also been used to try to sell a house and poker industries.

On March 2, 2021, NASCAR Xfinity series announces that Dogecoin would be sponsoring the #99 car in the Alsco Uniforms 300 at las Vegas.

Cardona is a public blockchain platform.  It is open source and decentralized, with consensus achieved using proof of stake.  It can facilitate peer-to-peer transactions with its internal cryptocurrency Ada.

Cardano was founded in 2015 by Ehtereum co-founder Charles Hoskinson.

PolkaDot CryptoCurrency was founded by Gavin Wood and Peter Czaban.   Wood is also a co-founder of Ethereum cryptocurrency.

Polkadot is a heterogeneous multi-chain interchange and translation architecture that enables customized side-chains to connect with public blockchains.

The technology surrounding Polkadot is set to help support the decentralization of the web.  Polkadot’s first token sale closed on October 27, 2017 raising a total of 485,331 ETH.

The current value of Polkadot is $39.24.  The assumption is that Polkadot value will be $149 in the year 2030.  It will be a profit if you start investing in Polkadot cryptocurrency.

Chainlink is a decentralized Oracle network and cryptocurrency that provides real-world data to blockchains.  It is one of the main sources of data used to feed information to applications in decentralized finance.

Chainlink Cryptocurrency was founded by Sergey Nazarov in 2017.  In 2019, Google announced that it was integrating its BigQuery data analytics platform with Chainlink, allowing data from outside sources to be used in applications built directly on the blockchain.

Chainlink’s token is Ethereum based and has technology that delivers prices feeds into various decentralized finance applications.  Link aims to curb dishonest centralized data-feed providers by using a distributed network of nodes to verify data it receives from sources.

Tether is a controversial cryptocurrency with tokens issued by Tether Limited, it was launched in 2014.  Tether converts cash into digital currency, to anchor or tether the value to the price of national currencies like the US Dollar, the Euro, and the offshore Chinese yuan.

The Tether platform is built on top of open blockchain technologies, leveraging security and transparency.  Tether is the most widely integrated digital-to-fiat currency today.  Buy, sell and use Tether tokens at Bitfinex and other major exchanges and service providers.

The only problem with this Cryptocurrency is that it is restricted in many countries.  In fact, US persons are also restricted from using the Tether platform unless they are Eligible Contract Participants (ECP) pursuant to US law.

Litecoin is a peer-to-peer cryptocurrency and open-source software project released under the MIT/X11 license.  Litecoin was released via an open-source client on GitHub on October 7, 2011 by Charlie Lee, a Google employee who later became engineering director at Coinbase.

The Litecoin network aims to process a block every 2.5 minutes rather than Bitcoin’s 10 minutes.  This allows Litecoin to confirm transactions much faster than Bitcoin.

Litecoin uses scrypt in its proof-of-work algorithm, a sequential memory-hard function requiring asymptotically more memory than an algorithm that is not memory-hard.

Though there are some more cryptocurrency alternatives of Bitcoin in which one can invest, But still Bitcoin is the best.

There are still millions of people who are investing in Bitcoin and they will continue to do in the future as Bitcoin has also given a positive output.  People who have invested $100 a couple of years back we’re able to earn 200% profit.

Always be positive and then you will see positive things happening around you.

We have detected that you are using extensions to block ads. Please support us by disabling these ads blocker.